What Forgiveness is & What it is Not 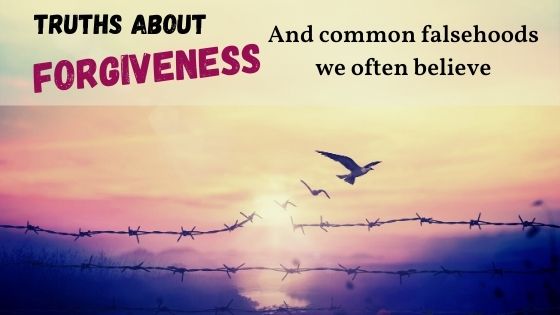 Let’s face it, forgiving someone is not easy. In fact, it can be the hardest thing you’ve ever done.

Contents
1 Why is forgiveness hard?
2 What Forgiveness is Not:
2.1 Ignoring the injustice.
2.2 Letting someone treat you badly.
2.3 Glossing over wrongs done to you.
2.4 Pretending things are OK or stuffing your anger.
2.5 Amnesia or simply forgetting.
2.6 Pardoning, condoning, or excusing.
2.7 Trusting the other person.
2.8 A magic trick to make someone change.
2.9 A feeling.
2.10 Dependent on an apology.
2.11 Based on what’s fair.
2.12 Optional.
3 What Forgiveness Is:
3.1 A courageous effort go to let of a grudge.
3.2 A moral choice not based on feelings.
3.3 Requires empathy.
3.4 Takes seriously the awfulness of what happened.
3.5 Healing the memory of the harm.
3.6 Essential to recovery.
3.7 An act of mercy toward the offender.
3.8 Giving up control of angry feelings,
3.9 A journey to freedom.
4 Mental & Emotional Benefits of Forgiveness
5 Physical Benefits of Forgiveness
6 Spiritual Benefits of Forgiveness

Why is forgiveness hard?

Forgiving someone could be hard for a number of reasons:

And sometimes it’s just plain having a prideful heart that wants revenge, and enjoying the sense of power that comes from hanging on to unforgiveness.

Figuring out what forgiveness really is could help you overcome the barrier you may experiencing.

But, let’s first look at what forgiveness is not, because sometimes it helps to know what a thing is not in order to figure out what it is.

What Forgiveness is Not:

Ignoring the injustice just buries it deeper, but that does not remove its effect on your life. As long as the injustice lies buried you will react and respond to situations and people in reference to it.

Letting someone treat you badly.

Forgiving someone does not mean you allow them to walk over you. This is not Christian. (See my video on How to Stop People Walking Over You)

Glossing over wrongs done to you.

It won’t help to minimise what was done to you and pretend that “it’s not so bad, other people have it worse”. You can’t heal from a hurt unless you name it and acknowledge what it has done to you.

Pretending things are OK or stuffing your anger.

If you’re doing this, you’re living a lie. And you can only live a lie for so long before it catches up on you. Stuffing your anger will not stop you from being angry – it’ll bubble out somewhere, sometime.

If you heal from the hurt you will never forget the incident but the pain associated with the memory will disappear. “Forgive and forget” is not necessarily healthy. Forgiveness is not denying the hurt even exists.

Trusting the other person.

Trust is always earned. Unlike forgiveness, which is granted even if the person never changes. You should only trust someone who has proven to be trustworthy.

A magic trick to make someone change.

Don’t assume that your forgiveness will cause them to repent, own what they have done, and change. They may never change.

You don’t have to wait to feel like forgiving someone before you forgive them. It’s a choice.

Dependent on an apology.

You can forgive even if the person never apologises.

Based on what’s fair.

Forgiveness is about forgiving someone who doesn’t deserve forgiveness – just as Jesus forgives us.

God commands us to forgive those who sin against us.

A courageous effort go to let of a grudge.

And let’s face it, it does take courage to forgive. Because forgiveness is not a natural response – our natural response is to get revenge or to hate. Forgiving someone is a sign of strength, not weakness.

A moral choice not based on feelings.

You don’t have to feel like forgiving the person to forgive them. You can choose to because it’s what God wants you to do. It’s an act of the will.

You must feel different about the person you are forgiving. God is able to put empathy in your heart towards the person who hurt you. He can help you see things from their perspective and feel sorry for them rather than hate them.

Takes seriously the awfulness of what happened.

True forgiveness counts the costs of what was done. It does not minimise or discount the injury. You must know what you are forgiving someone for. (see my video How to Forgive Someone Who has Hurt You)

Healing the memory of the harm.

Forgiveness will not remove the memory of what was done to you, but going to God for healing of the hurt will erase the pain associated with that memory. Once the pain of that memory is gone you can choose to forget it – meaning, because the pain is gone, the memory won’t keep resurfacing to make you miserable.

If you want to be whole and healthy you must forgive. Holding on to bitterness and resentment is toxic and will poison your system with negative thought patterns. It will also flood your body with toxic chemicals that affect physical health.

An act of mercy toward the offender.

Giving up control of angry feelings,

no matter how justified they are. And sometimes they are very justified! But holding on to your “rights” only poisons you.

A journey to freedom.

Forgiving someone has a powerful impact on our own mental, physical, emotional, and spiritual health.

Here are some benefits:

When you forgive someone you give up your “right” to hear an apology, to be bitter and to get even.

And forgiving someone enables you to reflect the character of God by extending mercy and setting the offender free – even though they may not deserve it.

Have you ever struggled to forgive someone? What made the difference for you? How did you reach the point where you were able to forgive them?

How to Prioritise your Life

10 Things You Can Do to Leave Past Mistakes Behind