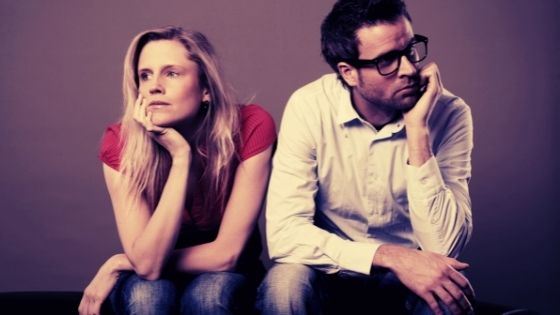 Do you ignore issues in your marriage and pretend everything is ok?

Contents
1 How to bring up issues in your relationship
1.1 Recognise the danger of NOT talking
1.2 Talk about not talking
1.3 Know yourself
1.4 Start small
1.5 Get help
2 Do’s and Don’t’s for raising issues with your spouse:
2.1 Don’t glare
2.2 Don’t assume
2.3 Don’t get personal
3 Focus on repairing your relationship

Do you dread conflict so much that you’d rather not say anything?

Do you hope the bad feelings will just go away?

The reality is that avoiding emotional pain in your relationship works against you.

Unsolved relationship issues trigger deeper worries about how safe and secure you feel together and will create emotional distance between you.

This means you are missing out on some of the biggest blessings of marriage!

How to bring up issues in your relationship

How can you go from not talking to talking; from avoiding conflict to facing it?

Recognise the danger of NOT talking

Do you want your relationship to suffocate and die? Do you want to, at best, live past each other without a real, vibrant connection?

I’ll wager that nobody really wants this. Deep down inside we all want connection, understanding, emotional intimacy.

Talk about not talking

Before you can start tackling the issues in your relationship, you should talk about the fact that you aren’t talking.

Make an appointment with your spouse and broach the subject. Come up with ideas on how to solve this problem (because it is a problem!).

Don’t be accusatory. Encourage open discussion about the fact that you don’t talk to each other.

How do you deal with problems? Do you tackle them head on or avoid them as much as possible?

You may be passive aggressive, which includes behaviours that allow you to express your frustration without actually having to talk about it such as:

Do you brush things under the mat and pretend they don’t exist?

Do you avoid conflicts altogether?

The problem with this style of conflict resolution is that issues build up and become a volcano that later explodes. Messy.

On the other hand, you may solve problems aggressively by:

Richard and I recently counselled a couple who were having a disagreement in front of us. He was presenting his case calmly and politely while she was leaning toward him, speaking aggressively and accusing him – almost finger-in-your-face style.

This is also not a healthy way to solve conflict and doesn’t help the other person pluck up courage to express their viewpoint.

Both types need to learn balance and how to resolve conflict in a healthy way.

Related: 14 Things not to do when you’re in a fight

Don’t tackle the biggest issue between you. Set aside time to talk about a minor conflict and follow good rules of communication.

Be brave – sometimes you have to do a thing even though you’re afraid of it.

Go for counselling. Sometimes it’s easier to talk about contentious issues in front of someone else. The counsellor will see things you don’t because you are too close to the issue.

Do’s and Don’t’s for raising issues with your spouse:

Doing this or going silent doesn’t help your spouse understand the problem. Angry looks will make your spouse defensive.

Do this instead: Be clear- Tell your spouse what you are upset about without accusing. “I was counting on you doing this for me. You forgot and it makes me feel like I don’t matter.”

Don’t expect your spouse to know how you feel or to figure out what you want. They are not a mind-reader.

Do this instead: Explain – Be clear about what you want and need and what hurts you. “It hurts me when you don’t listen to how bad my day was.”

Do this instead: Speak from your point of view. Focus on what happened from your perspective. Talk about the behaviour instead of breaking your spouse down. “I feel that you aren’t paying attention to what the kids are doing when you are minding them. It makes me feel like you are not really interested in helping me.”

Focus on repairing your relationship

The purpose of resolving conflict is to strengthen your bond, not weaken it.

When you have worked through conflict or are still in the process, do anything that eases the negativity between you: an apology, a hug, a smile, a reassurance of your love.

One of the biggest questions a spouse has during conflict is, “Do I still matter to you?” Make sure the one hurting knows this when you are attempting to resolve conflict.

One caveat: don’t sacrifice principle for the sake of apparent harmony. Don’t say it’s ok if it’s not ok. Don’t apologise for something you are not guilty of.

If you want real connection with your spouse then work on closing the emotional gap between you by honing your conflict resolution skills. It will strengthen your marriage and create relational intimacy and satisfaction.

Who doesn’t want that?

What’s your conflict resolution style? Which of these points do you need to work on?

Note: This post was first published in 2017, but has been updated. She sat across…

What To Do When Your Husband Doesn’t Respect You

Note: This post was first published on January 10, 2018 but has been updated. Today…